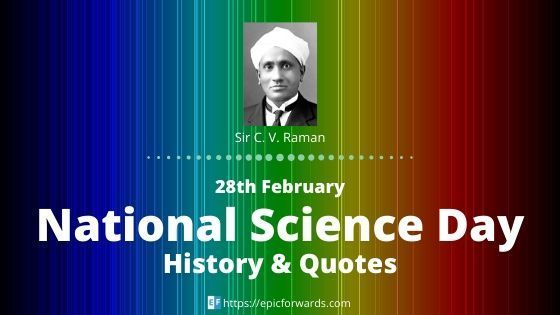 In this post, you will get the answers of –

Who was C.V. Raman?
How National Science Day is started?
What is the purpose of the celebration of NSD?
Celebration and activities on NSD.
Themes for NSD.

In 2013, The American Chemical Society has been designated the ‘Raman Effect’ as an International Historic Chemical Landmark.

India has a great history of scientists and scientific & technological development. February 28 is also celebrated the contribution of all the Indian great scientists, their discoveries and their advanced knowledge.

Some of these great scientists are:

The good thing about science is that it’s true whether or not you believe in it.

Sir Chandrasekhara Venkata Raman, popularly known as C. V. Raman was an Indian Physicist. He had born in Tamilnadu, a state in India. He worked at the Indian Association for the Cultivation of Science in Kolkata, West Bengal from 1907 to 1933. Here he worked and researched various topics of Physics.

Working in the laboratory of the Indian Association for the Cultivation of Science, he discovered the phenomenon of spectroscopy which is known by his name ‘Raman Effect’. For this discovery, he got the prestigious Nobel Prize in the year 1930. Apart from the Nobel Prize, he was honored by many awards.

How National Science Day is started?

In 1986, the National Council for Science & Technology Communication (NCSTC) put forth a proposal to designate 28 Feb as a National Science Day in front of the Government of India.

Only two things are infinite, the universe and human stupidity, and I’m not sure about the former.

What is the purpose of the celebration of NSD?

It is celebrated every year with the following purpose –

It spreads the message about the importance of science & its applications in day to day life of people.
It displays the activities, efforts, and achievements in the field of science for the welfare of society.
It creates an opportunity for scientific-minded citizens in the country.
It encourages people to develop a scientific approach to life.

Celebration and activities on NSD

Many schools organize science models exhibitions and lectures on science-related topics. It creates awareness about science and current trends in technology. It develops scientific temper in the minds of the people.

Many leading science and technology institutions in India celebrate National Science Day on a major scale.

The following table shows the theme of NSD for the current and past few years.

Science is nothing but perception.

Which is your favorite Science Day quote? Do share in the comments.

You would love to read these Quotes by Genius Albert Einstein.